YellowTieGuy Celebrates The “Misery” of The Inevitable Unexpected
Regional rock band releases their third single from their forthcoming album.

WASHINGTON D.C.: Alternative, Pop, Rock band YellowTieGuy releases their third single from their forthcoming album The Inevitable Unexpected. “Misery,” will be available on all major music platforms (Spotify, Apple Music, Amazon, etc.,) at midnight EST January 22, 2021. The band will debut the track during a Facebook broadcast on January 21, 2021 at 7:00PM EST where fans can listen, ask questions, and hear more about the recording experience from the perspectives of each band member. YellowTieGuy will also publicly announce the release date of the music video for “Misery,” and plans for a remix collaboration with Honest Lee of Growroom Productions.

“Misery” at its core is about the struggle between doing what feels right for yourself and doing right by others. Like many YellowTieGuy songs it seeks to encourage empathy by exploring multiple points of view using a traditional pop-style song structure, rock & roll rhythms and melodies, with thought provoking lyrics. “I want anything except what’s right for me if what I want should cause you misery,” would be a heartfelt sentiment that under any circumstance would change the world in a positive way if more individuals would put it into practice. In today’s COVID-19 environment, it might be compared to how wearing a mask in public is not merely about protecting ourselves, but being thoughtful towards the health and safety of others who might be more at risk of complications from exposure.

When YellowTieGuy first began recording songs for The Inevitable Unexpected, it did so in the hopes of creating an EP that celebrated the diversity of artistic talent throughout the Washington D.C., Maryland, Virginia region known as the DMV music scene. It was inspired by the Foo Fighters’ Sonic Highways film that was featured on HBO and the music from the same album. “We hoped to be able to record in multiple studios with a variety of producers and engineers throughout the region, feature album art from local artists, and feature other musical artists or vocalists from the DMV as guests on the various tracks,” says YellowTieGuy frontman and vocalist Daniel Warren Hill. “Before we could get any momentum on the project, we had to scale that back a bit because of COVID-19, and we were only able to release two songs (“Information” and ”I Cry”) where we had the opportunity to work with a producer inside their own studio spaces.”

The band would have the pleasure of recording “Misery” in the home studio of YellowTieGuy keyboardist Kyle Crosby, who happens to be the former Sound of Music’s (Richmond, VA) primary Studio B engineer. The track is mixed by Kenny Kingsborough who owns Harbour Red Studios in Baltimore, Maryland; and mastered by YTG’s own Daniel Warren Hill, who also has a background in audio production. The band plans on continuing to produce the remaining songs from The Inevitable Unexpected in similar fashion and release them every few months until all the tracks are completed before launching the full album, which has grown from EP to album since the band continues to write additional songs that continue to highlight the theme derived from the project’s title. YellowTieGuy hopes they can continue to adapt their plans to include more of the Washington D.C. area’s incredible talent in all aspects of music and entertainment throughout future releases.

About YellowTieGuy:
YellowTieGuy was founded by singer/guitarist Daniel Warren Hill in 2009, and is joined by former Crooked Crow bassist Jamie Rasmussen, former Dreamscapes Project drummer/percussionist Eric Sanford, and former Copper Sails keyboardist Kyle Crosby. YellowTieGuy jokes they are the world’s first “Discount Super Group,” given their individual successful musical careers that have provided them with nearly a century of writing, recording, and performing music while performing around the world and working with Grammy nominated producers and engineers. YellowTieGuy promises they are “almost as good as your favorite band.” 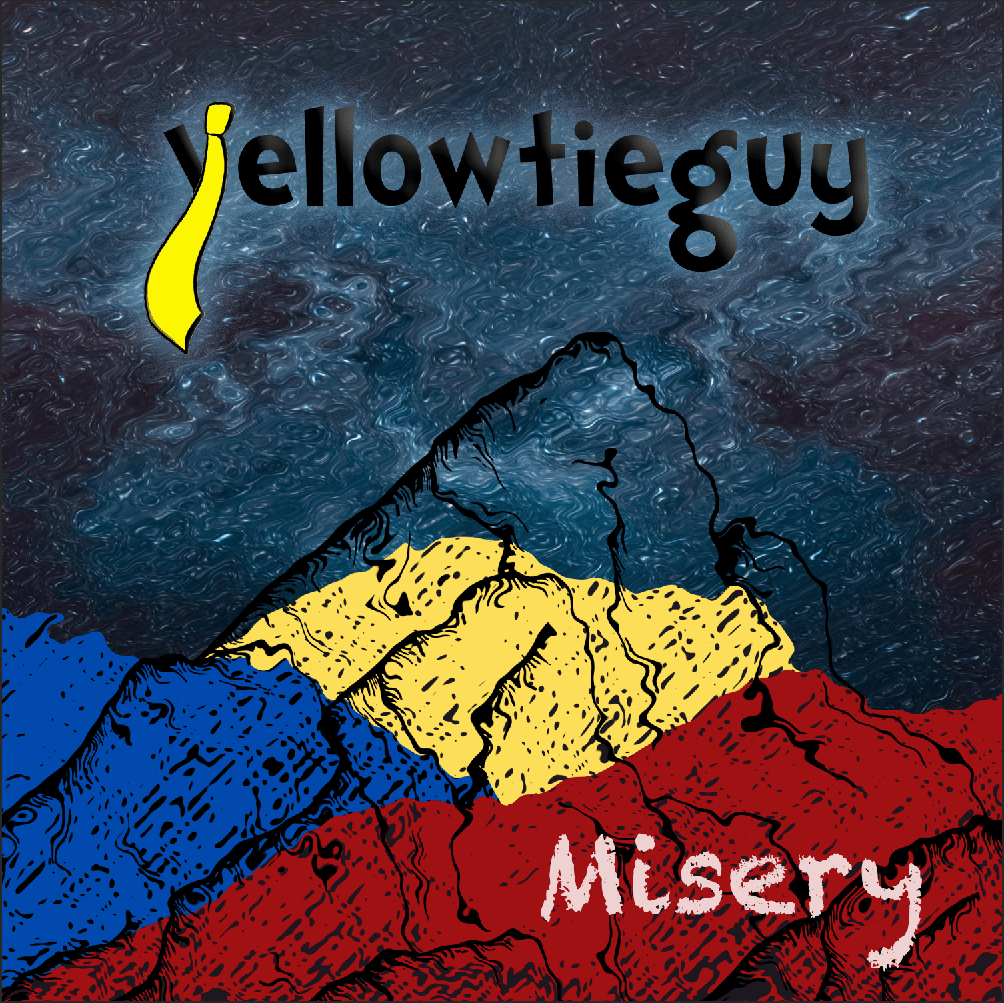 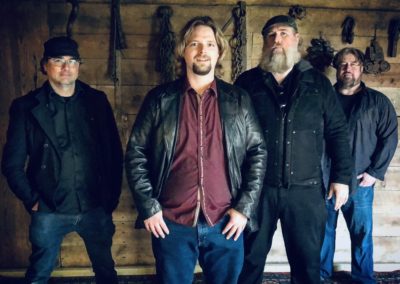 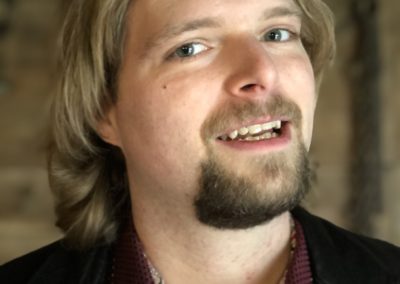 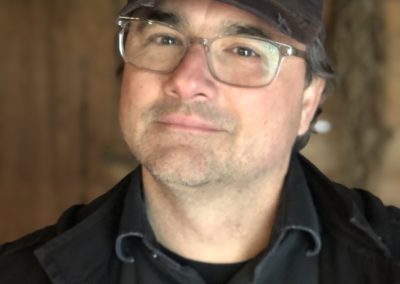 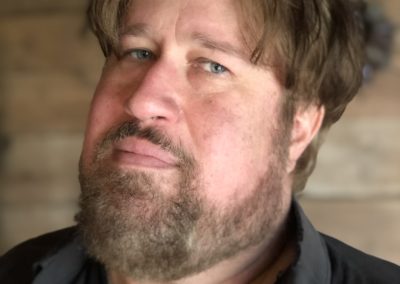 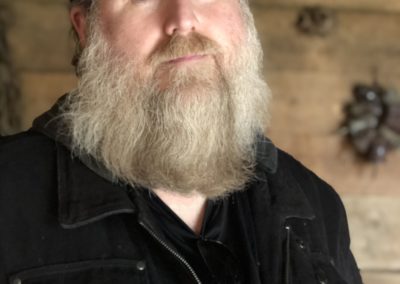 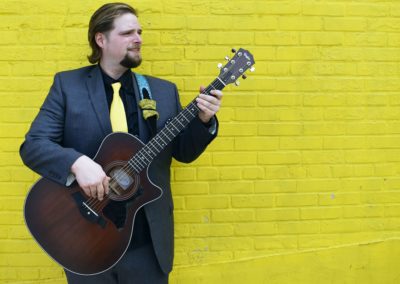 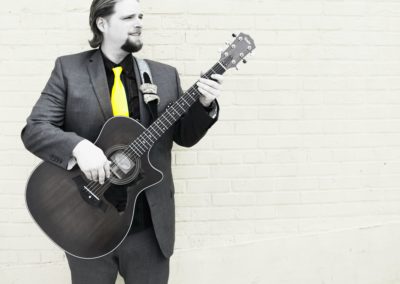 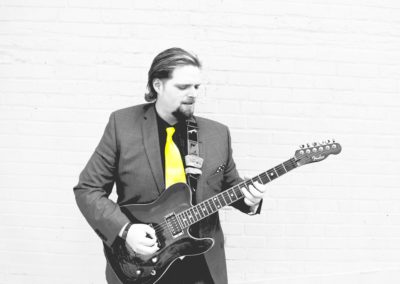 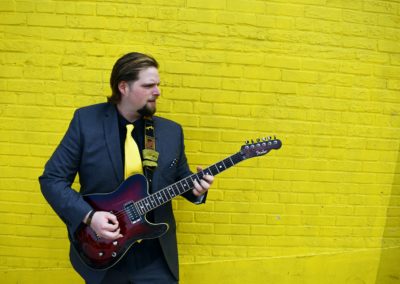 American Singer-songwriter, guitarist, and vocalist, Daniel Warren Hill began writing and performing music professionally in 2009 as a solo artist, wearing a yellow tie one performance after the next; creating a memorable experience through voice and song, and a lasting visual reference as “the guy in the yellow tie.” When recording and releasing the debut YellowTieGuy album Joy In the Mourning in 2011, the band kept the moniker and the name became synonymous with both the band and the man. Joy in the Mourning was well-received in the band’s hometown area of Washington DC metropolitan area, gaining local press and radio airtime.

The band continued developing it’s Pop/Rock sound with it’s 90’s Alternative influences; compared at the time to artists such as: R.E.M., Stone Temple Pilots, Fuel, and Collective Soul. YellowTieGuy would then have the opportunity to perform with some of their influences on various venue and festival dates while touring and building a fanbase along the East Coast

YellowTieGuy’s 2016 follow-up release, Play On Words, was preceded by the lead single, “Anthem,’ which became successful in re-engaging fans with its uptempo music and optimistic lyrics. The band organically started to develop a message of positivity and personal growth as an effect of trying to grow beyond their more melancholy sound of their debut album.

The band itself has changed lineups over the years, as contributors to recording and live performances have always had the freedom and liberty to lend their talents when it was convenient to family, career, and other creative outlets. In addition to Hill, the band is currently represented by bassist Jamie Rasmussen, Drummer/Percussionist Eric Sanford, and Keyboardist Kyle Crosby.

YellowTieGuy is presently recording and releasing a series of singles leading up to the imminent release of their third offering, The Inevitable Unexpected. This project is inpsired by Foo Fighters’ Sonic Highways (HBO) which featured contributions from performers and producers from across the United States. With a more local sentiment, YellowTieGuy has brought on board guest musicians and contributing studios & producers from around the Washington D.C. metropolitan area.

“Information,” the first single from The Inevitable Unexpected, was released in response to the murder of George Floyd and in support of the Black Lives Matter movement. The song itself was originally written after the death of Freddie Gray while in police custody, and was inspired by the tumult of misinformation and social media activism surrounding events like the 2016 Presidential Election, the Dakota Access Pipeline, and the separation of families at the U.S.-Mexico border. “Information” encourages everyone to question their own personal biases, and to live every day with honesty and integrity both online, and IRL.

The second single from The Inevitable Unexpected, “I Cry” is a testimony of the spiritual component that has always been present in YellowTieGuy music, resulting from Hill’s childhood upbringing in a fundamental Baptist household. Hill was unable to maintain a relationship with a building and a congregation that was unable to support Hill’s efforts to perform meaningful music outside of church services and related events. “I Cry” creates a place where vulnerability and courage are expected and celebrated, while providing room for mistakes to be made and individuals to grow; knowing they will always have a place to come home to.

The music and the journey continue in 2020, in spite of COVID-19 restrictions and quarantining. The band is releasing “Misery” on all major music platforms on January 22, 2021 and is remotely producing a variety of media and content that will allow YellowTieGuy to continue to work towards the recording that explains what we continue to face no matter how well we plan: The Inevitable Unexpected.

For the most current information about YellowTieGuy and The Inevitable Unexpected, please visit yellowtieguy.com